The Official Trailer of "Children of Srikandi" is now online 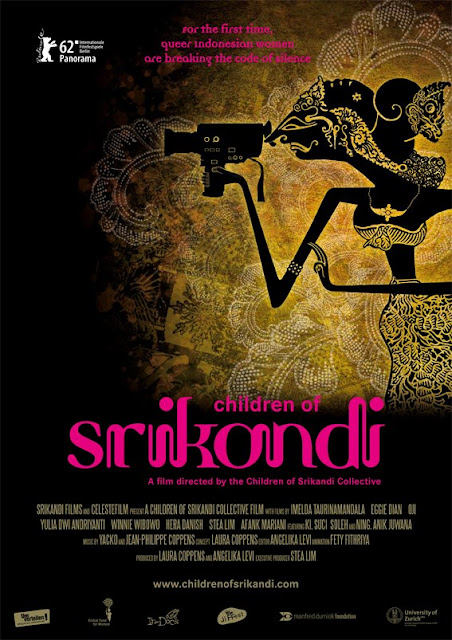 Here's my new soundcloud address. Go check it out :)

itsyacko
Posted by Unknown at 9:06 AM 0 comments

I swear this video is hilarious! he sounds like a chicken LOL!!!!!
Enjoy!

Updated News on Children of Srikandi

Congrats Laura, Stea and the whole team! It's gonna be fantastic!

Click The Berlin International Film Festival for more info.
Posted by Unknown at 11:49 AM 0 comments

It's really an honor for me to be able to work with Laura Coppens, Stea and the whole team of Children of Srikandi. Thank you for believing in me from day one and giving me all the encouragement to develop this song.

I must admit that this is one of the most challenging projects I've ever done. The lyrics and the music have to be powerful and able to express the song. i was challenged to paint pictures with words that will be able make connections. To do this I will need to conduct some research and use some metaphors.

The first draft was like a mess but after several editing process, I managed to let everything spill out onto the page and hold nothing back. Another challenge came from the emotion and flow. Not only that i need to be able to make people understand about the lyrics but it should also touch them on a thoughtful, emotional or spiritual level. Fortunately, I got the whole support from the CoS team, it's magic when I step in the booth, i got the flow :) Moreover, the music was produced by Keytut from Storia and Endru from Soul ID. The adorable Audrey Papilaja (Moluccas) was also helping dropping some tunes.

The movie itself is in the final cut and need some more technical polishing. In order to be able to do that, I need your help to CONTRIBUTE, SHARE, SPEAK or CLAIM and visit this link --> Children of Srikandi

The anthology CHILDREN OF SRIKANDI is the first film about the world and experiences of queer women in Indonesia. In interlaced short films, eight female filmmakers tell us about what it means to be a queer woman in the most populous Islamic country in the world. For this, they did nearly everything by themselves. They learned to write a script, to hold a camera, to edit.. to become filmmakers. They all got the immense courage to speak out their truth, in a context of recent violent attacks against LGBT events.

These moving authentic and poetic stories are interlinked with the tale of Srikandi, which serves as the framework plot. Srikandi is one of the main characters of the Mahabharata, a well-known Indian epic. Even today Srikandi is still frequently used in the traditional Javanese shadow puppet theatre plays (wayang kulit). By changing gender identity (born as a female, but living as a man) and sexual orientation, i.e. crossing the bounds of the normative perceptions of being a woman, Srikandi is a strong symbol for many women in Indonesia. She is a “female warrior”. Srikandi’s story features in beautiful shadow theater scenes, used as transitions, serving to remind viewers that same-sex love and gender variety were not imported from the West but in fact form a deep and ancient aspect of Indonesian society.

We have now completed 90% of the film and are working towards the completion to make it fit for the big screen!

All women collectively worked as a crew or actress in each other`s film. The eight short films range from observational documentary and concept art to personal essay films and therefore then anthology transcends the borders between documentary/fiction/experimental film. The common thread is both the radical personal perspective of the filmmakers and the appearance of the same persons in different roles (e.g. as street kid and as religious Muslim woman) in the short films of the others. From the beginning to the end, change is possible on all levels of the film: personal, political, and also on the formal level, transformation is always inscribed in the narrative. Form and identity are fluid; perspectives are shifted.

The puppeteer, the singer and the gamelan orchestra, who accompany the tale with music and singing, are an essential part of the shadow theater play. Both the puppeteer and the singer are male to female transgenders. Soleh (25) and Ani (59) work since many years as wayang kulit performers in Surabaya, East Java. CHILDREN OF SRIKANDI also tells of Soleh and Ani and in doing so, expands the tale of Srikandi to the presence - Srikandi is embodied and represented by them as an inverted mirror image. Thus, the narrative of the wayang kulit play is changed from fiction to documentary and from the past into the present.

“Women, especially LBT women are underrepresented in media, their issues and conflicts are swept under the rug. Our goal is to reach out to many LBT women in Indonesia who are afraid to come forward or feel that they are alone. If we can reach just one heart a time, then we already succeeded.” (Stea Lim, director, executive producer).

As more news fueled stereotypes about Muslims increase, this film made by eight local filmmakers gives a glimpse of their daily experiences by showing their own point of views. By doing the filming themselves, the women are able to share their feelings and talk about their stories in an authentic way. Thus the films give voice to a group rarely heard, revealing personal tales of exclusion and struggle, but also love and happiness. In a country where women are afforded only a very low status, there is also meaning at the level of social intervention. The film is both aesthetically engaging and politically empowering. Popular stereotypes about Muslims, and LGBT people are thereby deconstructed and challenged.

Please help us to make a difference and to empower queer women around the world! Help us to make them believe in their own voices and inspire them to tell their own truths!

We already have a strong interest from international film festivals since we first reported on our project on Facebook. They are keen to program the film on its completion. So we need your involvement in the completion of the film, so we are able to show it to as many people as possible globally.

You can help to make this film possible! If we reached only 350 people and everyone donated $15 (11€) - which is a sandwich and a big coffee in a coffee shop - then we can reach our goal!

What We Need & What You Get

Specifically, your money will go towards:

Check out the cool rewards, and please help us reach our goal!

Other Ways You Can Help!

Even if you cannot help us financially, you can support us to spread the Campaign through your social networks! You can help to build buzz and make a real impact in this world.

Check out the different ways to help:

Search What You Want to Find

Sell your beats online at ReverbNation.com

Promote Your Page Too